The cine-Lessons are the educational activity of the Chania Film Festival (CFF).

They began in 2001 and constitute a multilevel intervention in the field of audiovisual education at the level of Crete.

A network of educational activities, which are addressed to the educational community, giving the opportunity to students and teachers:

a) to see films with pedagogical characteristics
b) to get to know basic principles of cinematic art
c) to draw basic knowledge in order to be able to integrate modern media (digital photography, camcorder, computer, etc.) in a creative game with the daily educational process.
(d) be able to act as critical recipients of audiovisual products.

From 2001 until today, thousands of students and teachers have seen films as part of the organized screenings we organize. Dozens have participated in workshops, educational activities, summer schools, workshops, discussions, productions of educational films and a multitude of parallel actions.

The educational activity cine Lessons is a unique regional action in the country with these characteristics, which persists and intervenes since 2001 thanks to the synergy of local actors and our partners over the years, from the field of cinema, science, education.

Cine Courses are a project, which has as a guarantee its duration and quality, the dozens of institutions and creators it has collaborated with. A project with a social character, as in recent years, in the context of their screenings, about 4 tons of food are collected per festival that are distributed to 12 social institutions of Chania.

A key reason why the cine-Courses have been continuing since 2001 is the fact that they are creatively based on a large circle of collaborators from filmmakers, educators, academics, scientists and artists who consider audiovisual media and especially cinema to be a crucial tool in the modern educational process.

The steady course of the action and its consistency have created inextricable bonds of cooperation with bodies and authorities that have been supporting it since 2001, contributing to its continuity and development.

Of course, constant partners of the action are members of the educational community. Either with the institutional qualities of the Directorates of Education, the Parents' Association, etc. or as natural persons teachers, students and parents participate and actively support the cine Courses.

The cine Courses are an informal and at the same time model synergy between Regional and Local Government, the state and of course private sponsors. An element that is – in addition to the content – a component of success and durability.

The Region of Crete and especially the Regional Unit of Chania have been a supporter of the action cine Lessons from its beginning supporting and actively as co-organizers.

In recent years, cine courses have been consistently supported by the Municipalities of Chania, Platanias, Kissamos, Apokoronas, Kantanos-Selino.

Of course, special mention is also needed for the dozens of private sponsors who since 2001 have been supporting cine Courses.

Finally, we note that all the content, the workshops, the screenings, the productions as well as the parallel events of the whole year of the action cine Learnings and the Chania Film Festival (CFF) take place with FREE ENTRANCE.

So far, among other things, they have collaborated with cineLearning Courses:

A) Bodies of Local Government, Education and Culture such as:

B) Actors of Cinema and Media such as:

See here the films created in the framework of its Educational Activities
Chania Film Festival:
https://www.youtube.com/channel/UCVkWlFX8F7AUn-7QYscPpWw 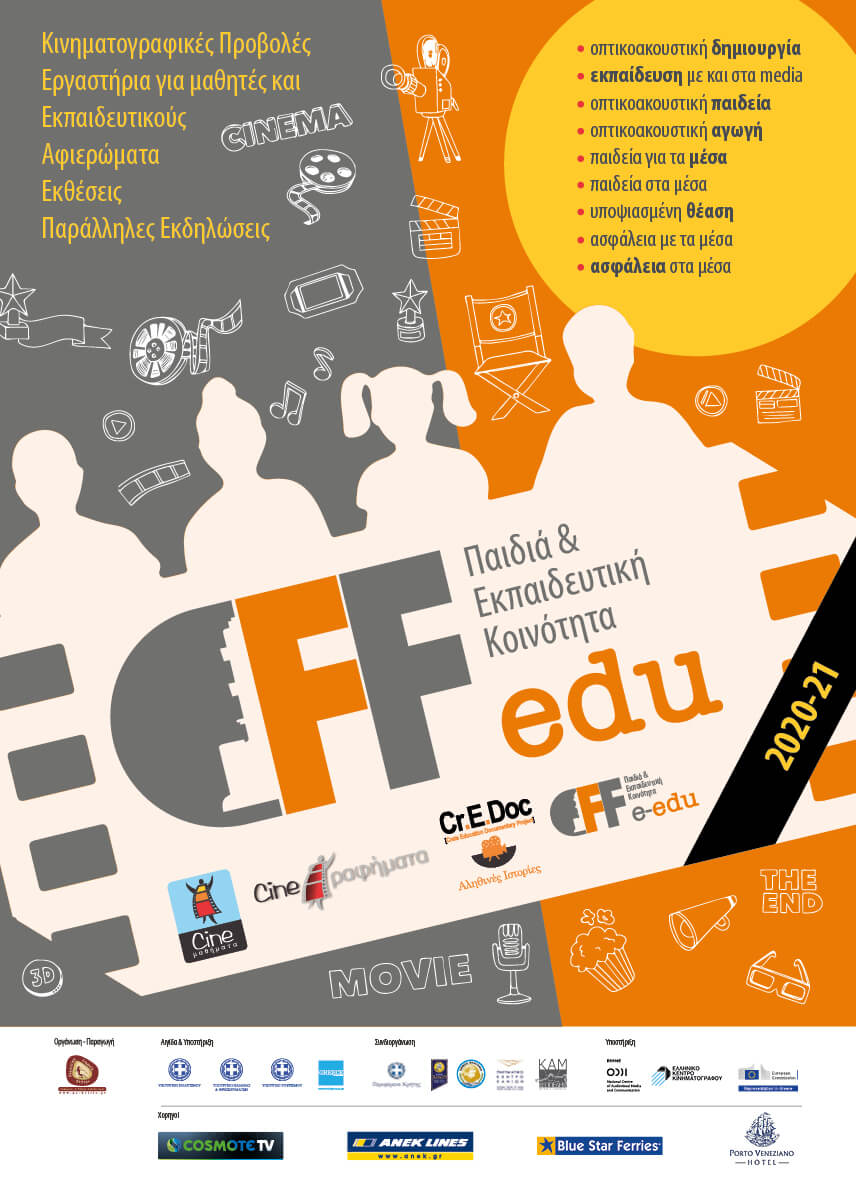 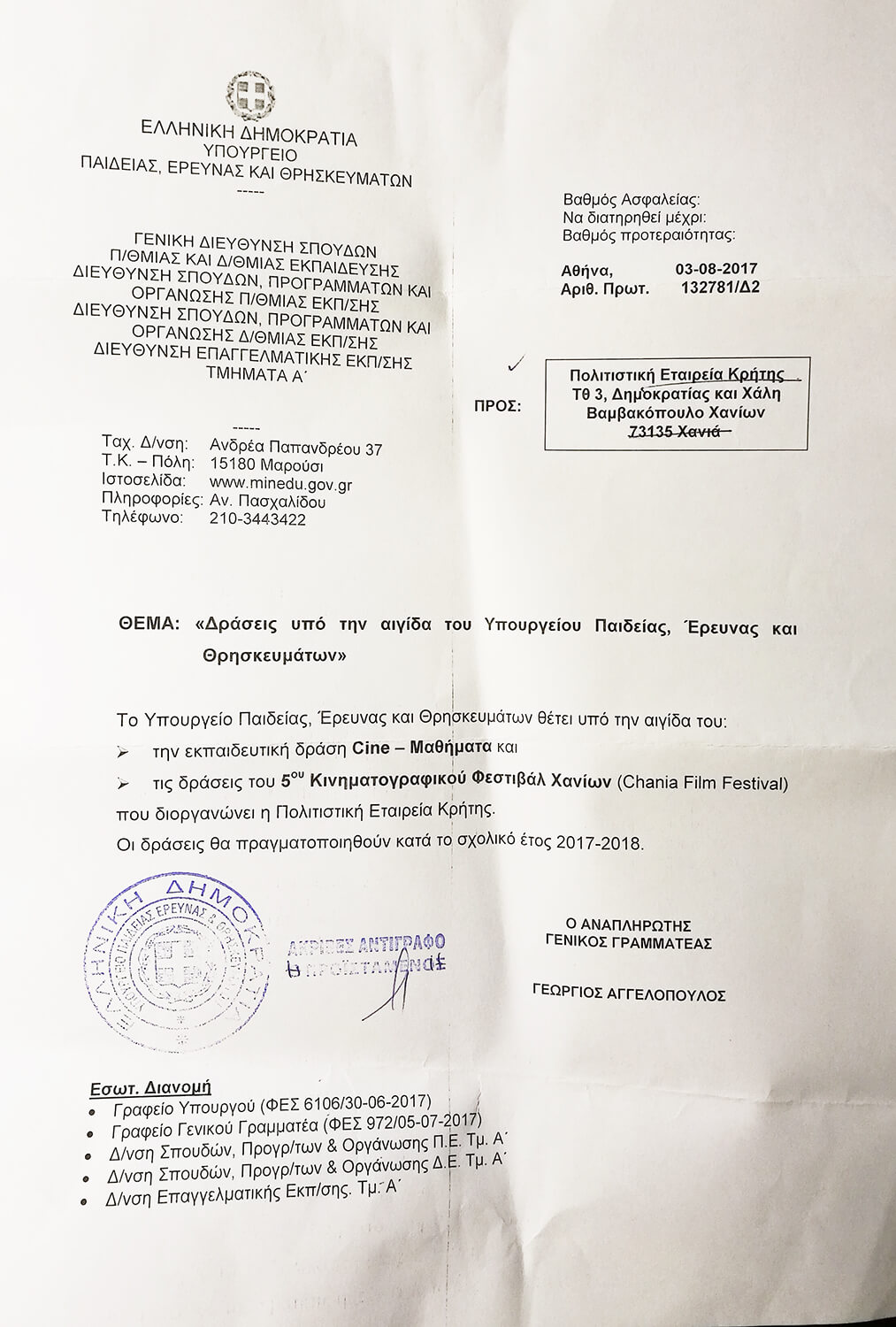 APPROVAL OF THE IMPLEMENTATION OF EDUCATIONAL PROGRAMS 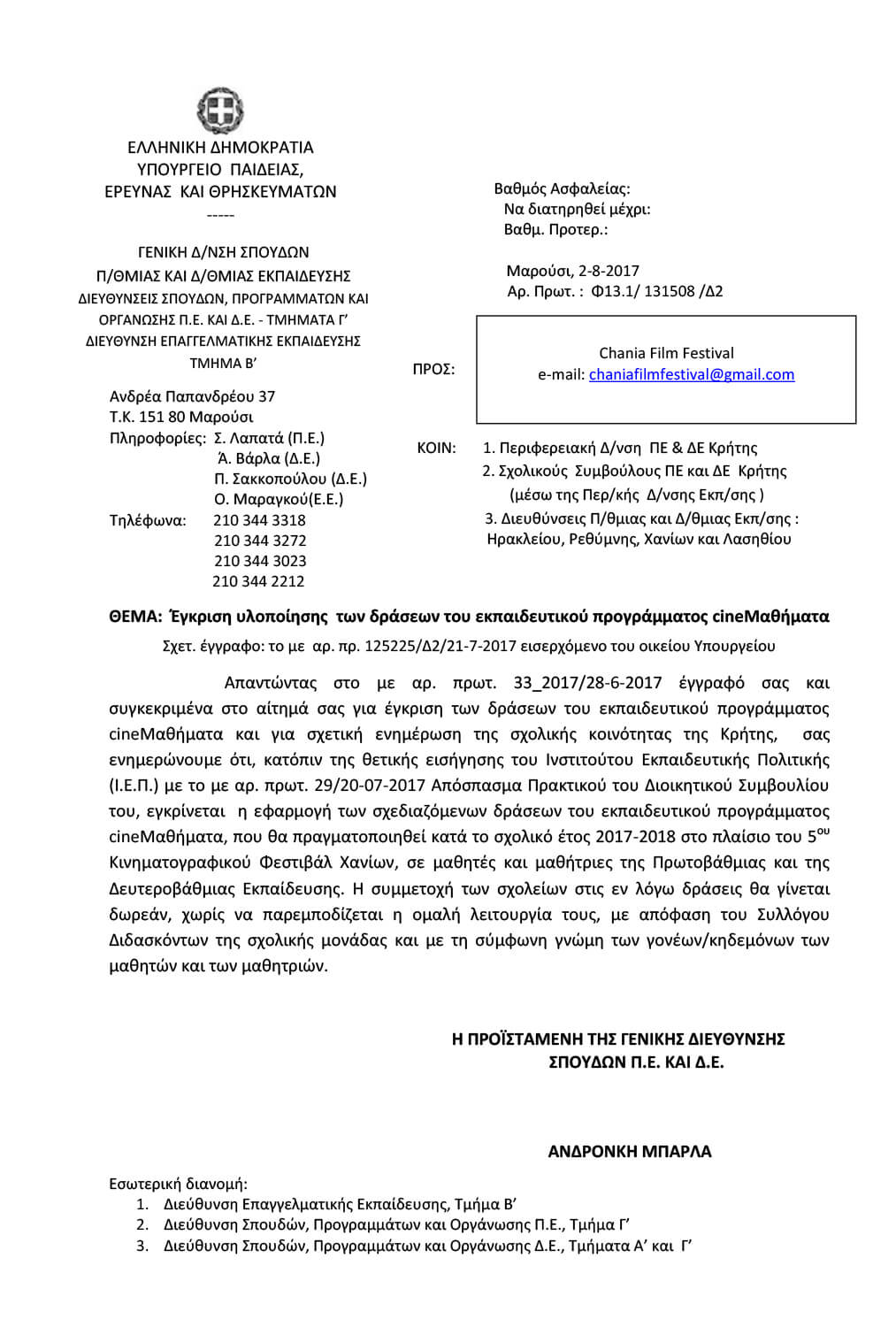