With a brilliant ceremony at the packed Cultural Center of Chania and awards of commemorative diplomas to the schools that created films as part of its educational programs, the 7th Chania Film Festival was completed. After the screening of 20 films created by students and teachers of Chania during the school year 2018-19, awards were presented by the Deputy Regional Governor of Chania Nikos Kalogeris, the Mayor of Chania Panagiotis Simantirakis, the Mayor of Platanias Giannis Malandrakis, the thematic Deputy Regional Governor Antonis Papaderakis, the executive regional advisor Sophia Malandraki, the General Secretary of the Cultural Center of Chania Manolis Kelaidis, the Director of Secondary Education of Chania Stelios Zervakis, the Director of Primary Education of Chania Manolis Miliarakis and the Deputy Mayor of Culture of Chania Yiannis Giannakakis.

During the awards, the institutional representatives pointed out the great growth that the Chania Film Festival is experiencing and the acceptance it has from the friends of cinema and education. Particular reference was made to the great intervention made with the educational programs of the Festival in the field of audiovisual education.

Closing in the evenings, the Director of the Chania Film Festival, Matthaios Frantzeskakis, made two honorary awards first of all to the Rector of the University of West Attica Panagiotis Kaldis for the support of the University in the activities of the Festival, based on a relevant protocol of cooperation and to the former Deputy Regional Governor of Chania, Apostolos Voulgarakis, for his undivided support to the Festival and its educational activities during his nine-year term.

The appointment was given for October 2020 atthe 8th Chania International Film Festival and in between the continuous actions and interventions organized and implemented by the Festival.

The evening ended with a concert by the band Change House of Chania in the courtyard of the Cultural Center of Chania.

Photographic Material from the Closing Ceremony can be found at
https://www.dropbox.com/work/cff%202019/cff%20video%20photo%20public/10%20day

Photographic Material from all the days of the Festival
https://archive.chaniafilmfestival.com/pictures-7cff/

Watch the 10 days of the7th Chania International Film Festival through the videos created by the CFF production team
https://archive.chaniafilmfestival.com/tvnews-7cff/ 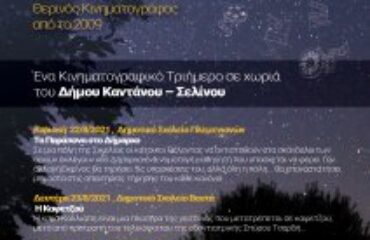 Open Air Cinema in Villages of the Municipality of Kantanos-Selino