Within the framework of the parallel activities of the 7th Chania International Film Festival (23 October-2 November) took place on Wednesday (30/10) at the Cultural Center of Chania, the presentation of the book of the actor and collector Lefteris Lambrakis, “From Chania to Hollywood”.

The book is an important part of the collection by Lefteris Lambrakis, with photographic and not only material concerning history of cinema in Chania. This material “blends” with texts that record this history.

As Lefteris Lambrakis points out:

“I collect photos and material for the cinema from my childhood. I did it to be close to my heroes. This over the years it became an obsession. I became an actor and could secure more material. I have a very rich collection. Thus arose the need to take it out and share it with the world. The Director of the Film Festival Chania Mathios Frantzeskakis threw me the idea and suggested that we do a book in which all my material on the Cinema in Chania”.

Sources for the compilation of the book stood the National Library, the Historical Museum, the Venizelos Foundation, the Municipal Library, many private files and of course and above all, its rich collectible material Lefteris Lambrakis.

But why the title “From Chania to Hollywood”? “I discovered the Journal “Herald”, October 1929. I found an article titled “Sometimes and now… Chania and Hollywood”. The article stated that they were not lagging behind Chania from Hollywood (that is, Hollywood) to the Cinema. Have three major cinemas in Chania. The owner of one of them, Charilaos Spandagos, studied cameraman in Paris and had the ambition to makes a film production studio in Chania. He had even turned several movies, did “auditions” etc….”.

An evolution of cinematic reality of Chania and its flourishing in the city, in the early 20th century is the 7th Chania Film Festival.

“The story begins in 1899 and reaches the 7th in 2019 Chania Film Festival. We were pioneers back then. The Cretan state played a decisive role in the cinematic events of Chania”, points out Lefteris Lambrakis.

The presentation event of lefteris Lambrakis’ book (which finds further material possibly for a new edition in the future) was honored with their presence The Mayor of Chania Panagiotis Simandrakis, the Regional Councilor, appointed on issues of Education and Culture and president of the Municipal and Regional Theatre of Thessaloniki Sophia Malandraki, while excerpts from the book were read by the philologist and president of the Association of Philologists of Chania Varvara Perraki and the actor Lefteris Botonakis. In the premises of the Cultural Center of Chania, film material of the valuable collection of Lefteris Lambrakis is exhibited. 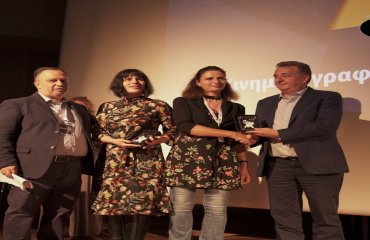