Hamini is Charlie Chaplin's first feature film, which he writes, directs and stars. "A comedy with a smile and possibly a tear", are the first words the viewer reads. The truth is that the film includes more dramatic than comical elements. By the time Chaplin auditioned to find "the hamini," he had just lost his newborn child. Eventually, little Jackie Coogan discovered him in a musical hall, where an acquaintance of his dancers appeared. As soon as the dancer finished, he introduced him to his young son. The great actor was impressed with the unparalleled talent of the little one and took him to the film. Also "the hamini" is visibly influenced by the actor's difficult childhood. The room in which the vagabond and the child live resembles the one he lived with his mother.

"The Hamini" was filmed in 1921 and is entirely a creation of the great Charlie Chaplin. It is also his first masterpiece. The film retains the elements of slapstick comedy, but it also has many elements from Chaplin's personal life. The loss of his child, his divorce and his poor years are presented in the film. The great comedian, the first recognizable of his time, left nothing to chance, he worked a lot. He survived the passage from the silent to the talking and continued to give plenty of laughter. In most of his films he appears as a noble bum, "Charlotte", as he was named in Greece. He formed this character in 1914 in the film "to earn his living". He was accused of being a communist by the McCarthyists and went into self-exile in Switzerland in 1952. He returned to America only in 1972 to receive the Oscar that was awarded to him for his overall contribution to cinema.

A young woman has brought a baby out of wedlock into the world. She feels helpless and in a moment of weakness leaves her baby in a limousine along with a letter. The same car, however, has also caught the eye of two thugs. They steal the car and when they realize that a baby is inside they leave it in the trash. There a "vagabond" will find it and give it naively to a woman with a baby who is there next door. But the child is not hers and he, not knowing what to do, leaves it behind again. But in fear of the policeman patrolling there, he takes it again. With the baby cuddling he is looking to find his mother. When he realizes that he is nobody's, he decides to keep it. At the same time, the unlucky mother regrets and searches for her baby. But it is too late.

The years go by , the vagabond and the hamini have been tied up. Together they have set up a job. The hamini precedes and with stones breaks the windows of the houses. Then the vagabond appears with glass windows to be replaced. At the same time, the mother has become a famous actress and singer, but she has not overcome the abandonment of her child. He decides to find it, while doing charity in the poor neighborhoods of the city. There she meets her son, but she does not know it. One day the child gets sick, the doctor who will examine it finds that he is not growing properly. It doesn't take long for them to come and get it for the foundation, and while it's crying, Chaplin will steal it. They end up in an asylum for the poor. The happy end, however, does not take long, the mother will reunite with her child after a game of chance. The likeable vagabond after a strange dream, will also be with them.

The ordeals of the film...

"The Hamini" tested a lot of the great protagonist's endurance because of his personal life. His relationships with his then wife went from bad to worse, until in the end they divorced. Because of his breakup, as soon as he finished the film, Chaplin left California. He feared that his ex-wife would include it in the terms of the divorce and lose it. Moreover, the loss of his child cost him throughout the filming. Finally, the production company did not give him the money he expected to receive for the film. Nevertheless, audiences and critics liked the film. After all, Chaplin always knew what the audience wanted to see. He made films that were comical, but there was always a dark side, the side that life hides. The audience loved and distinguished him, the cinemas where his films were played were always full. 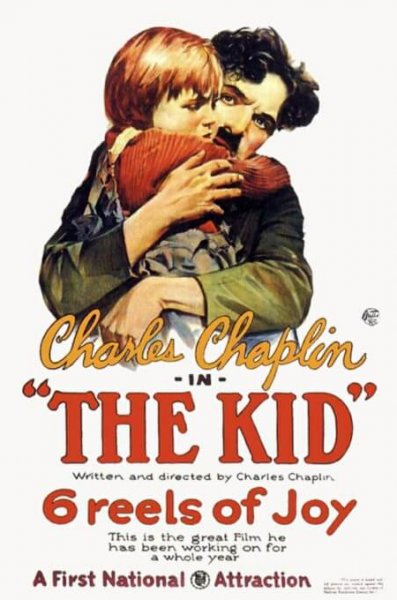