The 7th Chania Film Festival (CFF) is an international film festival, a celebration of the 7th art. Meeting place of culture! It takes place this year from 23 October to 2 November with more than 150 films in its central program, with several and particularly parallel programs, with 100 people from the field of Film and Education and much more. The venue this year is the Cultural Center of Chania.

On the occasion of this great cultural event, the organizers gave on Monday afternoon, at the Cultural Center of Chania, a press conference where the Chania Film Festival, which has now been established in the cultural consciousness of our society, were expressed with the best words.

Starting, the Deputy Regional Governor of Chania Mr. Nikos Kalogeris said: “We are pleased to be present at the continuation of the institution of the 7th Film Festival. We keep up with the institution from the beginning, as a Regional Unit of Chania. We are pleased to support this institution and the results of previous years are extremely encouraging. It is an institution that promotes the city and “snaps” with the culture and aesthetics of Chania. The themes of the Festival are extremely interesting and it is obvious that it also deals with the problems of modern society. His contact with schools, teachers and students cultivate their education and concerns. Congratulations to Mr. Mathios Frantzeskakis who is the “soul” of the Festival and the collaborators and we will seek to strengthen the institution in every way”.

For his part, the Mayor of Chania, Mr. Panagiotis Simandrakis said: “It is with great pleasure that the Municipality of Chania participates and attends the 7th Chania International Film Festival. An institution that has a hyperlocal reference and highlights the Municipality and the city of Chania as a point of production of cultural events and events with a particularly extroverted mood. The most important thing is that all actors, with extensive synergies, can succeed in gaining the positive “look” and opinion of the people involved in cinema. Also, along with the films, the institution creates parallel actions in the field of education and in the field of volunteering. Congratulations are due to the team that has developed this institution as a top event and of course to Mathios Frantzeskakis and his associates. The Municipality of Chania is next to the institution, not only during the days of the Festival but overall ” .

The Mayor of Platanias Mr. Yannis Malandrakis pointed out: “The Municipality of Platanias participates for the third year in this event that has now become an institution. For us it was necessary to respond to the request of the organizers, as they also collaborate with schools of the Municipality of Platanias, with results that stand out not only visually, but also send the message through the small films that have been shot, but also the participation that has been achieved by the young actors, directors and young supporters of a production. We have therefore strengthened our participation in this year’s Festival. I believe that the film “Stella” with which this year’s premiere will take place is particularly important and we want this whole celebration of cinema and culture to be spread to young people, to young children and especially to us in the hinterland of our Municipality and that’s why we are helping in this great effort.

Particular reference to the institution of the Film Festival was also made by the General Secretary of the Cultural Center of Chania, Mr. Manolis Kelaidis: “This is the seventh time that this institution has taken place and we welcome it to the Cultural Center. It has become an institution and embraced the educational community of all levels. A cultural action curated by Mathios Frantzeskakis and his collaborators. We embraced this effort from the beginning, not only as co-organizers, but offering facilities, space and staff. It must be embraced further by the people of Chania. There are many who support the event and this is particularly important and to continue with the same zeal this effort with the same courage and the same strength and energy.”

Finally, the Director of the Chania Film Festival, Mr. Mathios Frantzeskakis pointed out: “The Chania Film Festival is here for the 7th consecutive year as a great synergy of more than 40 cultural and educational institutions. The bodies that support and co-organize this Festival are the Ministry of Education, the Ministry of Tourism, the Greek National Tourism Organization, the Region of Crete, the Antiregion of Chania, the Municipalities of Chania and Platanias and of course the Cultural Center of Chania, which hosts the festival’s activities and for which we should make special reference, as it is also an essential reason for the development of the action. The Chania Film Festival invites all of you to visit from October 23 to November 2 with about 150 films in its main program, with several and particularly parallel programs, with 100 people from the field of Film and Education who will see their work and discuss with them. We have the ability all these days, first of all, to be entertained, to have fun and to be educated. There is a special program for schools, with screenings and workshops in the mornings. Also, special workshops in the afternoons for all of you. The information can be found on the official site of the Film Festival www. chaniafilmfestival.com, to be informed and register. Many thanks to all those who worked and are working to get here and of course the volunteers who support this action.”

and have the synergy of the most important actors of Cinema, Culture and Education. 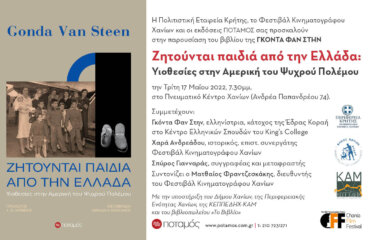