Gregory is a young child who struggles to find his place in a society full of analgesia and prejudices. Living in a racist environment, he largely adopts the logic of those around him and slowly loses the compassion for his neighbour. All this will be overturned when a new neighbor moves into his neighborhood. He, the Stranger, will make him see reality with other eyes and force him to take a stand.

Grigoris is a young boy struggling to find his place in a society full of prejudice. Living in a racist environment, he largely adopts the logic of his surroundings and slowly loses his compassion for his neighbor. All of this will be reversed when a new neighbor moves to his neighborhood. He, the Stranger, will make him see the reality differently and force him to act.

Konstantina Palli studied with a scholarship at the Russian Academy of Theatrical Art in Moscow. He is active as a director in theatre and cinema. She is a professor of acting at the Southern Higher Drama School. Her film Minimal has won an award for Screenplay, Best Actress, Music and Best Film at the Film Festival in Thessaloniki, Bronze Remi at the 49th Worldfest at the Houston and an audience award at the Athens Digital Fim Festival. The film Neighbors has won a Montage Award at the 12Months Film Festival and music festival at the Athens Digital Film Festival.

Konstantina Palli is a Greek actress and director. She was born in Athens and she studied at the Academy of Theatrical Arts(GITIS –RATI ) in Russia, drama faculty. She worked for several years as an actress and theatre director. At the present time, she directs commercials, music videos, and fiction films at Studio Rosso with her husband Nickolay Dorozhkin , who is the producer and cinematographer of the company. Konstantina Palli is the artistic director of International Film Festival IndieCrete (Crete – Greece) 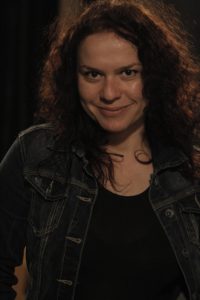