Open Air Cinema in Villages of the Municipality of Kantanos-Selino

The Chania Film Festival in collaboration with the Municipality of Kantanos-Selino are organizing a three-day film program with Cinema Under Asteria.

The itinerant cinema of the Chania Film Festival – who since 2009 wanders around the villages of the hinterland of Chania reviving beautiful aposperides against the backdrop of the magical world of7th art – invites to 3 screenings organized in collaboration with the Municipality of Kantanos – Selino 22-23-24 August 2021.

Specifically, the program of the screenings is:

In a Sicilian city the inhabitants, wanting to resist the scandals of the authorities, elect a new Mayor, a law-abiding professor who promises to bring about change, He will keep his promises, but the whole city… he will rebel against the demands of observing every rule!

Kyra-Kalliopi is a neighborhood laundress that turns into a café, at the instigation of the graduate of dentistry Spyros Tsardis…

The screenings are made with FREE ENTRANCE 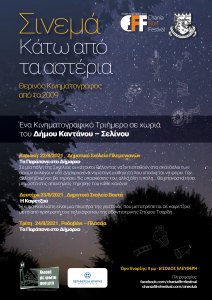