After the great success of the 7th Chania International Film Festival, we return again this year with the established film meetings of our Club.

From Thursday, November 28, 2019 and every Thursday at 10 pm our appointment will be in the welcoming hall of the ATTIKON cinema. In excellent conditions of screening and with a unique program of films and other cinematic activities, we will build together the CLUB OF THE FESTIVAL OF CINEMA OF CHANIA!

The Film Club of the Chania International Film Festival premieres for this season with the beloved film of Stavros Tsiolis Let the Women Wait (1998), as a tribute to his recent death. It is the second part of the Women trilogy, the first being The Women, Don’t Cry (1992) and the third Women You Passed By Here (2017).

Stavros Tsiolis was born in Tripoli in 1937. He studied at the Stavrakos School and worked in cinema since 1958, initially as an assistant director in finos film productions. In 1968 he released his first film, The Little Runaway, from Finos Film, for which he continued to direct films until 1971. The most famous is the Abuse of Power (1971), starring Nikos Kourkoulos and Betty Livanou in her first role.

Fifteen years later he returns with the film “Such a distant absence ” (1985), starring Pemi Zouni, Dimitra Hatoupi, Minas Hadjisavvas and Zacharias Rochas, in a photograph by the award-winning Giorgos Arvanitis. The film won 6 awards at the Thessaloniki International Film Festival. In total he directed 13 films, while as an assistant director he worked on over 50, while he wrote and directed many plays. He died in Athens last July.

You can read more about the work of Stavros Tsiolis in the following links:

Watch the trailer of Movie

See the full program of the Club until Christmas:
https://archive.chaniafilmfestival.com/cine-program-2019/

Make your application for the Friends Card online at the link below and collect it before the time of the screening or get it at the entrance of cine Attikon at the special stand, every Thursday before 10pm.

Get the Friends Card of the Chania Film Festival!

After the great success of the 7th Chania Film Festival, we are back again this year with our Cine-Club. From Thursday 28 November 2019 and every Thursday at 10 pm we have an appointment in the hospitable screening room of the ATTIKON cinema. We are ready to start together the Cine-Club of Chania Film Festival in excellent screening conditions and with a unique program of films and other cinematic activities!

Learn more about our program until Christmas: www.chaniafilmfestival.com/cine-program-2019/

Apply for the Friends Card online at the link below and receive it before the screening time or get it at the Attikon cinema entrance every Thursday before 10pm.
Friends card

For further information contact us at friends@chaniafilmfestival.com or call us at 6970651153 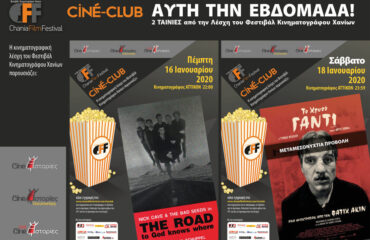 The only French film “A New Woman” by Leonor Seraille