The Babak / The Backpack

Mary has just stolen a burst of clothes. The city lures her to seek refuge in an Orthodox Church. Papalekos at the sight of the unexpected visitor sees a huge opportunity to save himself from his routine. A joint confession will follow, irrational by the standards of the Orthodox Church.

Mary has just stolen a huge amount of clothes. The city brings her to seek for shelter in an Orthodox Church. Papalekos, looking at the unexpected visitor, sees an enormous opportunity to be saved from his routine. There will be an unreasonable for the Orthodox Church confession, from both of them. 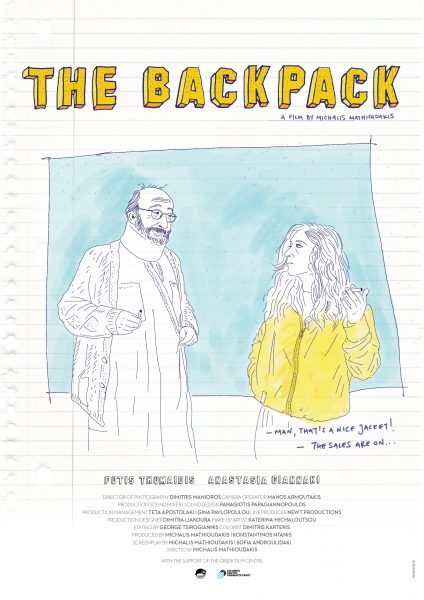 Michalis Mathioudakis was born in 1987 and grew up in Athens. He completed his studies in Physics at the University of Crete and continued his studies in cinema at a private school in Athens. In recent years he has been working in film productions and film festivals.

Michalis Mathioudakis was born in 1987 and raised in Athens. Studied Physics in the University of Crete and Film Studies in Athens. He is working in the film industry and in several Film Festivals in Greece. His most recent short film The Grocery Store (2017) (Greek title: The Grocery Store) is still travelling to festivals. His upcoming short film The Backpack is supported by the Greek Film Centre. The short film script At the Airport was chosen to participate in a film lab conducted by ERT S.A. in collaboration with the Mediterranean Film Institute, on October 2017, during which it was chosen to be funded.