A day that outside of film screenings included numerous school and Master workshops Classes were Tuesday (29/10), a fact that confirmed to the maximum extent the educational character of the 7th Chania International Film Festival.

Elementary and secondary school students, as well as adults, attended today, within the Cultural Center of Chania and within the framework of the parallel activities of the Chania Film Festival, the Theatrical Workshop and Theatrical Workshop for adults (Animator: Konstantinos Babilas, well-known theatrologist and director), the Sketch workshop by members of the Union of Greek Cartoonists on the occasion of the sketch exhibition “DEMOCRISIS – Democracy in crisis” (Animators: Members of the Association of Cartoonists), “We’re up in the air!” (Animators: Valentina Papadimitraki, actress, director, radio producer, Sofia Pateli, Radio producer). Also the workshops “Making a film with a mobile phone” (Animator: Rachiotis Christos (actor, educator), “A scene from a movie” (Animator: Kyriakos Charitakis), “Playing with the shots of a film” (Animator: Katerina Koroniotaki), Animation 2D (Animators: Kyriakos Charitakis, Katerina Koroniotaki).

The program included workshops outside the Center of Chania and more specifically at the Kournas School “Filming reality” (Animator: Irina Boyko) and at the Municipal Children’s Library, “Painting with Indian ink” (Animator: Joe Chang, director of the film “The Music Box”).

The workshops and master classes continue in the next few days until Friday (1/11). 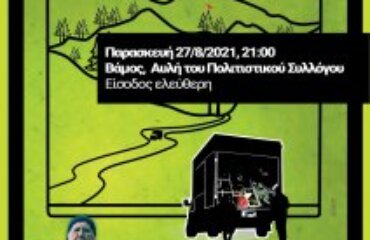 Cinema Under Asteria and Vamos!