The 7th Chania International Film Festival is preparing to open its doors to the public on October 23rd and the emblematic film Stella by Michael Cacoyannis was selected as the opening film in a new digital edition for the needs of the Festival.

The film Stella represented Greece at the Cannes Film Festival in May 1955, receiving favorable reviews, while in 1956 he won the Golden Globe, the Best Film Award of Hollywood foreign press correspondents, paving the way for director Michael Cacoyannis for great films and distinctions and her protagonist, Melina Mercouri for an international career. In 1960, he received the Best Film Award of the period 1955 – 1960, at the first Thessaloniki International Film Festival.

In a world where the woman is tormented, both in her family and social environment, controversial and submissive, the film comes to show the way of her emancipation, projecting Stella, the woman who rebels against all sorts of conventionality, taking fate into her own hands. The way the director stands against Stella and the praises of the foreign press highlight the heroine as the model of female liberation.

The film – now classic – is screened all over the world, even in various Universities. It is noteworthy that in Australia, at the Victorian Language School – the State School of Languages – Stella is taught to the students of the Second Lyceum, as an example of the role of women and men in the passage of time, through Greek cinema.

In Premiere of Chania Film Festival, on 23 October 2019, at Cultural Center of Chania, will be attended by the award-winning actress Tatiana Papamoschou, who embodied Iphigenia in the great film of the same name by Michael Cacoyannis, while the Michael Cacoyannis Foundation, which is a supporter of the Festival, will be represented by its Vice-President, Mrs. Xenia Kaldara. 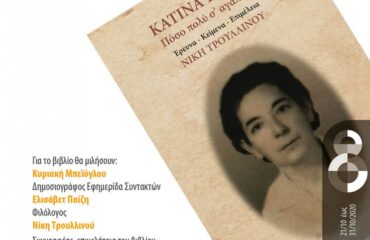