With particular interest and a dense program, another three-day event was completed at the Cultural Center of Chania, of the educational programs of the Chania International Film Festival.

On Friday 24/1 the creative team of the cine graphs program, which consists of trainees who are inthe 3rd year of participation in the program, participated in the planning for the shooting of a collective documentary which traces the history and the atmosphere in one of the oldest and historic bars in the country. The team operates under the coordination and supervision of Stavros Grosdos, Educator – Rapporteur and Designer of educational programs of the Festival, Angelos Kovotsos, Director – Collaborator of the Festival and Matthaios Frantzeskakis, Director of the Chania Film Festival.

On Saturday 25/1 took place the meeting of the action “Operation of a Film Club in a School”. More than thirty teachers have been participating since November in monthly meetings, in the context of which selected short films are presented and experiential activities are planned, which they are invited to implement in the film groups of their schools. Each time the meetings start with the feedback of the team from the impressive experiences of implementing the program in the schools and end with the preparation of the proposed film for the next month. On Sunday 26/1 was held and the monthly meeting of the program cine charts. In this program, a group of teachers attends audiovisual and film literacy training. Sunday’s meeting had the theme “Music and Cinema” with the composer – pianist Giorgos Saltaris as well as the head of the program Stavros Grosdos as well as the trainer.

Finally and at the same time, meetings are underway design and shooting of school films as part of the cinelearning program. We note that we note that in the current school year about 30 schools participate in the program making a documentary.

The educational programs of the Film Festival Chania have the approval of the Ministry of Education and Religious Affairs after relevant recommendation of the Institute of Educational Policy.

Participation in its actions and educational programs Chania Film Festival is without any financial burden of Participants.

– See the presentation of the CFF training programs: CFF EDU

Invitation for teachers to participate in a program 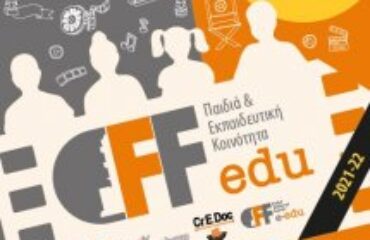