For the fifth consecutive year, the Chania Film Festival presented with great success – all over Crete – the International Festival of Very Short Films Très Court!

We celebrated our return to the open-air cinemas with a beloved film event. The 23rd Tr ès International Short Film Festival Court it took place from 4 to 13 June in 62 cities from all over the world. Among them are Chania, Rethymno, Agios Nikolaos and Sitia, in exclusive collaboration with the Chania International Film Festival. The global appeal of the Festival Très Court is sealed with the promotion of the film that wins the World Audience Award.

The film that garnered the most votes, worldwide, and won the Audience Award is the French film Nos héros (Our Heroes) by Léo Granperret.

The same film was highlighted as the first with their vote by the audience from the four cities of Crete. In the overall results of Crete, second comes the film
Descent
(Descent) and third the
Brief
Survey

More information on the results of the global vote and on each individual city can be found here: https://trescourt.com/en/public-prize?year=2021#p-greece

The Grand Prize of the Committee was won by the American film Photo Op by Dava Whisenant.

You can see the full list of this year’s Très Court Awards here: https://trescourt.com/en/23rd-edition-awards

The Chania Film Festival would like to warmly thank all those who contributed to the organization of the whole event: the Municipality of Chania and the CFSP FOR THE HOSPITALITY OF THE MUNICIPAL OPEN AIR CINEMA GARDEN AS WELL AS THE MUNICIPALITY OF RETHYMNO, THE MUNICIPALITY OF CHANIA Agios Nikolaos, PAODAN and the Municipality of Sitia. We also thank for their valuable support, our long-term collaborators, the Agios Nikolaos Film Club, the Cinema Club of sitia theatre and the Association of Friends of Music of Sitia.

The festival, based in Paris, has been taking place for the last 23 years during the same period of time in dozens of cities around the world. This year’s edition brings together over 60 cities from 23 countries. In the competition of the international festival participate films lasting no more than 4 minutes, representing all cinematic genres from all parts of the world. A two-hour journey with moving images in all widths and lengths of the planet. The festival runs simultaneously – in recent years – in 80 cities and in 28 countries around the world and was founded in 1999 in France. In it compete films no more than 3 minutes (without the titles and end titles), while the participations come from all countries of the world (fiction, documentary, animation, music videos, etc.). Upon completion of the screening of the films, the audience is invited to highlight the winning films for the award of the international Audience Award, through a vote. 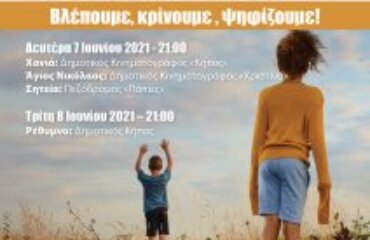