On Monday, June 7 in Chania, Agios Nikolaos and Sitia and on Tuesday, June 8 in Rethymnon we will enjoy the fastest international film festival in the world: 42 movies in two hours! We will be drawn on an express cinematic journey and vote for the best films, co-shaping together with others 60 cities from all over the world the result for the promotion of the Audience Award!

We see, we judge and we vote!

The festival, based in Paris, has been taking place for the last 23 years during the same period of time in dozens of cities around the world. This year’s edition brings together over 60 cities from 23 countries. In the competition of the international festival participate films, no longer, than 4 minutes, representing all cinematic genres from all parts of the world. A two-hour journey with moving images, widths and lengths of the planet. The festival runs simultaneously – in recent years – in 80 cities and in 28 countries around the world and was founded in 1999 in France. In it compete films, no bigger than 3 minutes (without the titles and titles of the end), while the participations come from all countries of the world (fiction, documentary, animation, music videos, etc.). Upon completion of the screening of the films, the audience is invited to highlight the winning films for the award of the international Audience Award through a vote.

· The Municipality of Chania and the CFSP – KAM

· The Municipal Cinema of Chania “KIPOS”

· The Municipality of Rethymno

· The Municipality of Agios Nikolaos and PAODAN

· The Municipality of Sitia

· The Cinema Club of Agios Nikolaos

· The Cinema Club of the Theatre of Sitia

· The Association of Friends of Music of Sitia 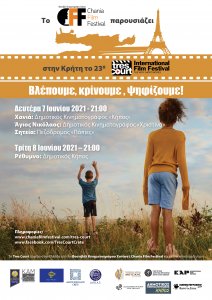