From Chania the only Greek participation in the 19th Seize the Film / Uhvati Film Festival in Novi Sad, Serbia

With the unique and beloved documentary “One school, two worlds!” of the Primary School of Emprosniero.

One of the films of the educational programs of the Chania International Film Festival is the only Greek participation in the 19th Seize the Film / Uhvati Film Festival in Novi Sad, Serbia.

The Festival will screen 41 student films – from all over the world – out of 466 submitted.

The film refers to little Evangelia, who communicates in sign language and can coexist in her school with her listening classmates. Evangelia’s department has two teachers. Both are engaged in teaching, but one, that of parallel support, speaks sign language and helps the little one to work with her classmates and to teach with them without any separation and no discrimination. In fact, the students also learn sign language so that they can communicate with Evangelia on their own.

The film was created by students and teachers of the Primary School of Emprosnieros in the framework of the educational programs of the Chania Film Festival. 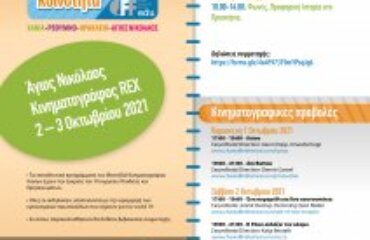 FILM DAYS for the educational community 2 and 3 October 2021